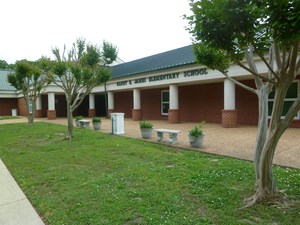 Harry E. James Elementary School (formerly Arlington School) was originally constructed in 1939. The site was then in Prince George County.  It was a five-room frame building that housed grades one through seven.

In 1945, the frame building was destroyed by fire and the pupils were temporarily housed in public buildings throughout the city.  However, in 1948, a six classroom brick building was erected and the school still housed grades one through seven.  In 1952, the City of Hopewell annexed a portion of Prince George County that included Harry E. James Elementary School.  One year later, four additional classrooms, a cafetorium and a basement were added to the school building.  A classroom was converted into a library.

In 1966, a mobile building was placed on the school site and this served as a remedial reading center for the school. The school then began housing grades one through five.